Deadfellaz Takes to the Wild West with Epic Wrangler Collaboration 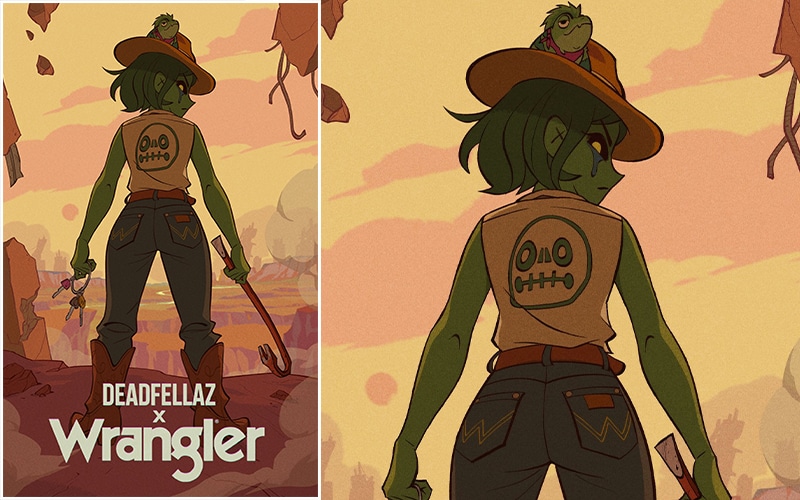 The American denim fashion brand Wrangler is partnering with top non-fungible token (NFT) collection Deadfellaz. The partnership was announced via a Tweet earlier in the week from Deadfellaz that was then retweeted by the official Wrangler Jean’s account.

To jumpstart the collaboration, Deadfellaz also revealed that they’d be hosting a competition. The competition will let Deadfellaz holders and fans work together for the chance to win both digital and physical prizes. Details about the prizes have not been released, but one could guess a pair of Wrangler jeans could be in the mix.

Deadfellaz is a collection of 10,000 “undead” NFTs on the Ethereum blockchain. The gender-neutral NFT project launched in August 2021, and has since risen in popularity among NFT fans, including celebrity entrepreneur Gary Vee — who owns at least one NFT from the collection. At the time of writing, the floor price of a Deadfellaz NFT on OpenSea is .65 ETH, or around $1,100.

According to a recent Tweet, the partnership will arrive at a crossroads where the paths zombies and cowboys intersect, revealing details of a wild and wonderful interactive storyline featuring the two brands. Ultimately, it will bring forth a host of both physical and digital rewards for those taking part.

Through the initiative, fans will embark on an epic ‘choose your own adventure’ style escapade, traversing the barren wastelands of the fearsome old west in search of fame and fortune. However, only the boldest and the bravest will have the stones to make it out alive!

Wrangler is not venturing into the NFT space for the first time. Earlier this year, the denim brand collaborated with NFT marketplace LTD.INC and Grammy award winner Leon Bridges to launch a NFT collection dubbed “Mr. Wrangler”.

Along with this, SuperRare announced its upcoming exhibition Cryptoart Couture which will run from September 9 to September 14 during NYFW.

Written by Rupal Sharma of